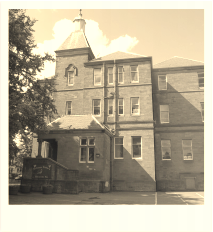 The earliest recorded owner of the lands known as Scotstoun was a younger member of the Montgomerie family which hailed from the Mont St Michel area of Normandy . In a Charter of 28th January 1529 , King James V gave Henry Montgomerie " the lands and tenandrie of Scottiston in the viscounty of Renfrew". Presumably young Henry had won the King's favour or Daddy had poured a few 'bawbees' into the Royal Coffers.

In 1607 another of that family, Hugh, Lord Montgomerie and Kilwinning, Earl of Eglinton appears to have inherited the lands upon which he built a 'fortalise' (a wee castle), a 'manor' (a big house) and various mills. Tenants were introduced to tend the lands and no doubt provide an income from rents; proving that the 'buy to rent' idea is not such a modern concept.
read more

Scotstoun the Early Years is an extensively researched document by local resident Moira Logan. It provides a fascinating insight into the history of the properties in our area. Moira's research now covers every individual property in the conservation area as well as new sections with interesting historical information and photographs.

The document is now in three parts: